Subscribe to be the first to get special offers, info about new arrivals, access to preorders and much more.

Skardu is a town with a population of 30.000, located at an altitude of 2,500 metres, north in the otherwise densely populated country of Pakistan (208 mill people). This strange town is squeezed in between the Himalayas and the Karakoram Mountain ranges, and the surrounding area has the world’s highest density of 7 and 8 thousand-meter peaks, with 82 peaks above 7000-meters. 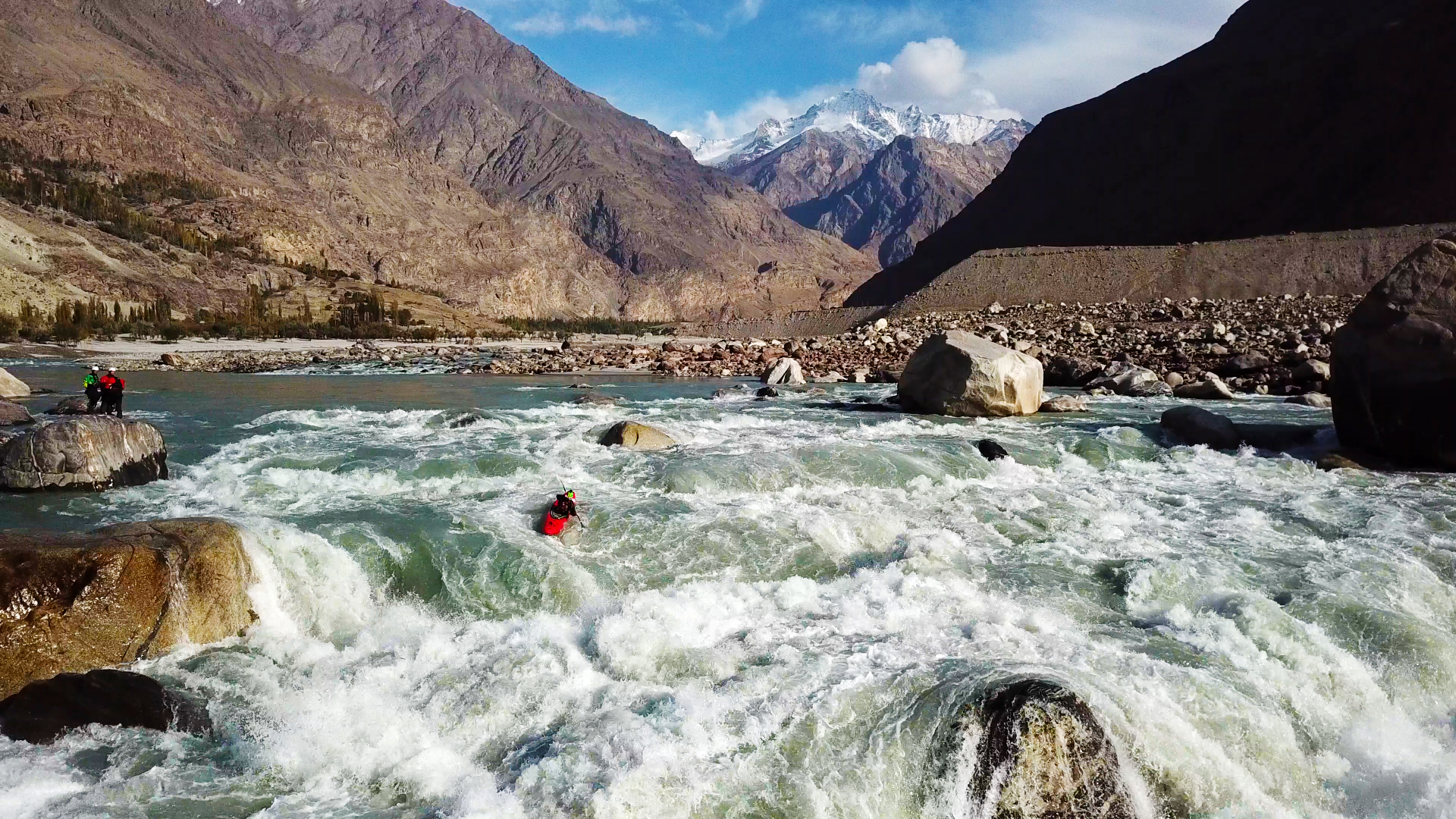 My office lies in Voss, a town in Norway, located west, about 50 meters above sea level. The highest peak visible from my desk is 1500 meters, and even though the town is squeezed in between UNESCO world heritage fjords and big waterfalls, the only water I see now is in a half empty glass that has the purpose of keeping me hydrated as I, high on coffee, plan the next lesson at my school.

Around Skardu  the Indus river flows, one of the longest rivers in Asia, slowly gathering force as it flows of the Tibetan plateau into the Gilgit-Baltisan region of Pakistan, where Skardu lies. Here, in the vast northern region of Pakistan, as Indus cuts through Karakoram, Himalaya and Hindukush ranges, the river forms the world’s most impressive white water. In a 3000-meter-deep valley where the water falls almost 1000m down the 140km long Rondu gorge, kayakers can find the most sublime experiences the world of water has to offer.

In Voss, Norway, straight over my desk, through my computer, flows the data of the internet. Where at the same time, the most impressive and important features of the world, and pure emptiness, saturates my life with both everything and nothing. And as I sit there, these two worlds of Indus and my office is connected when my messenger says *pling*.

"Are you ready?" David is writing.

And along with the words he has added a photo of exploding white water seemingly sending the American kayaker, Galen Volckhausen, into the air, and into an eternal orbit on social media.

But as I quite recently had made a life choice to stop listening to my thoughts, and start doing what I felt for, I quickly push my thoughts away and write him:

"Ah…maybe, if you give me the right drugs."

So, early one morning we are sipping on our second cup of tea with milk in a well-trimmed garden surrounded by sharp yellow birch trees that contrasts a landscape of snow covered mountains shooting up from the desert into the cold clear sky.

"Ok guys. It is time to go now. You’ve emptied the hotel of tea." Our guide, Salman, says. 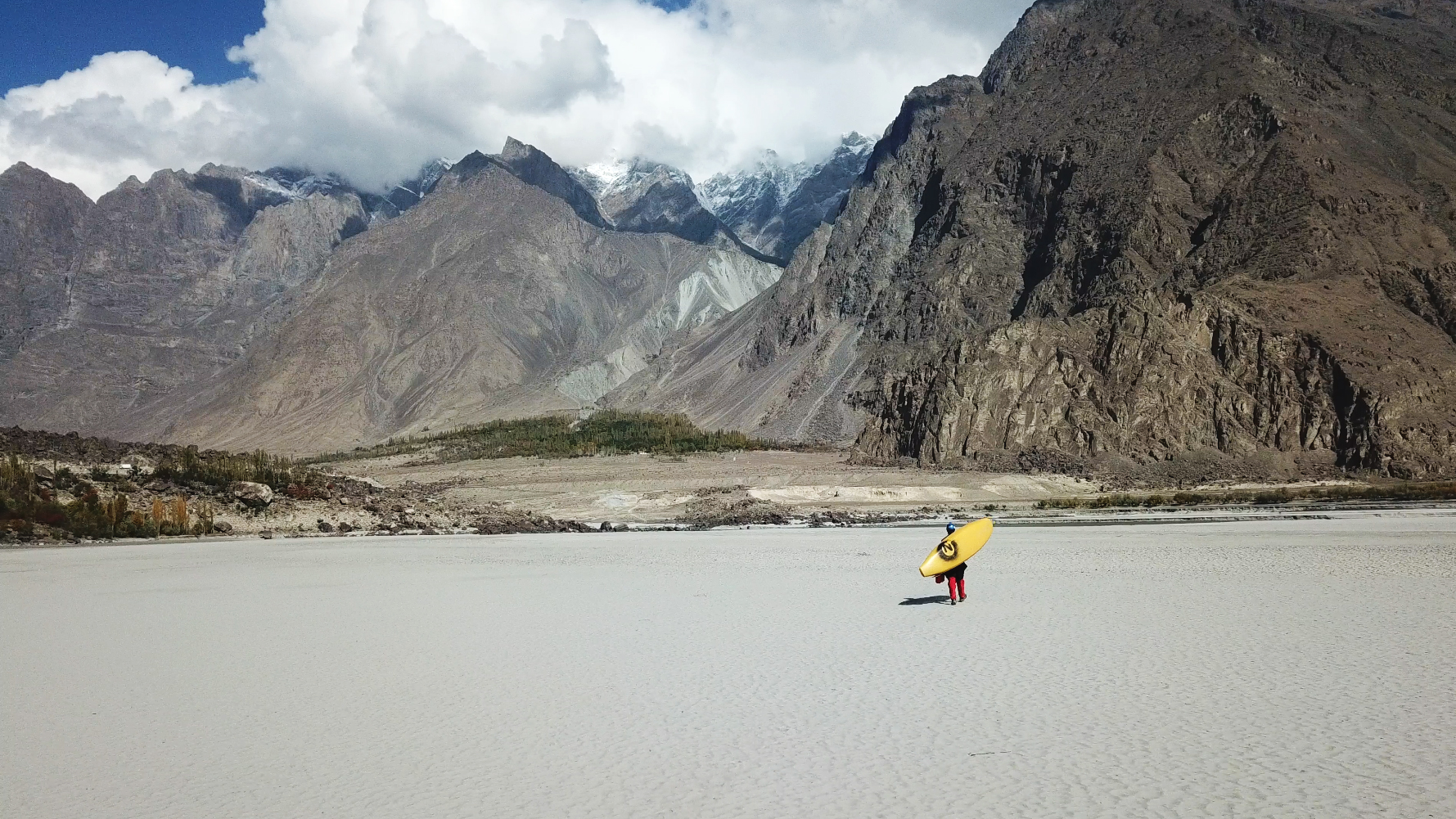 The Indus is curving wide and turquoise through the delta just below the hill of our hotel. David, who had convinced me to come here, had also lured a few other of his best kayaking buddies to this place. Bram Peters, Sergey Ilin, Palo Andrassy and Honza Lasko. The last week has been spent exploring some amazing tributaries of Indus. And trying to get a feel for the big volume rapids we have set out to paddle. With some smiles and some concerns, the group gets going. And to keep up with the intentions of this paragraph, to cut the crap, I suddenly find my self crossing a 200meter long beach carrying my Zet Cross to the sedimented waters of Indus.

It’s time to hit the water. Weeks of planning the logistics to get this crew to Skardu and around to kayak the remote tributaries, kayaking and warming up, filming shit and and getting to know each other, is all done.

"So, when does the rapids start, David?"

Yeah, well prepared is the word.

"The first day is pretty easy. A few big-ish rapids and flatwater in between."

David’s words sound somewhat calming to me, but the constantly appearing boils that all push me a meter to the left and a meter to the right efficiently counteracts any calm sensation. It feels pretty rough being here. At the start of the Rondu gorge. Indus is big. Being fed by the biggest glaciers you can find, it varies greatly in volume between the peaks in summer and the lows in winter. Annually I puts around 243 km3 into the Arabian Sea, a volum twice that of the Nile River and three times that of the Tigris and Euphrates rivers combined. So, there are good reasons for us to be here late October, when things have dropped off by meters and meters. Still, around 5-800 cms is pushing down the 800 vertical meters during autumn, but that’s way better than the thousands of cms that hammers down here in summer. 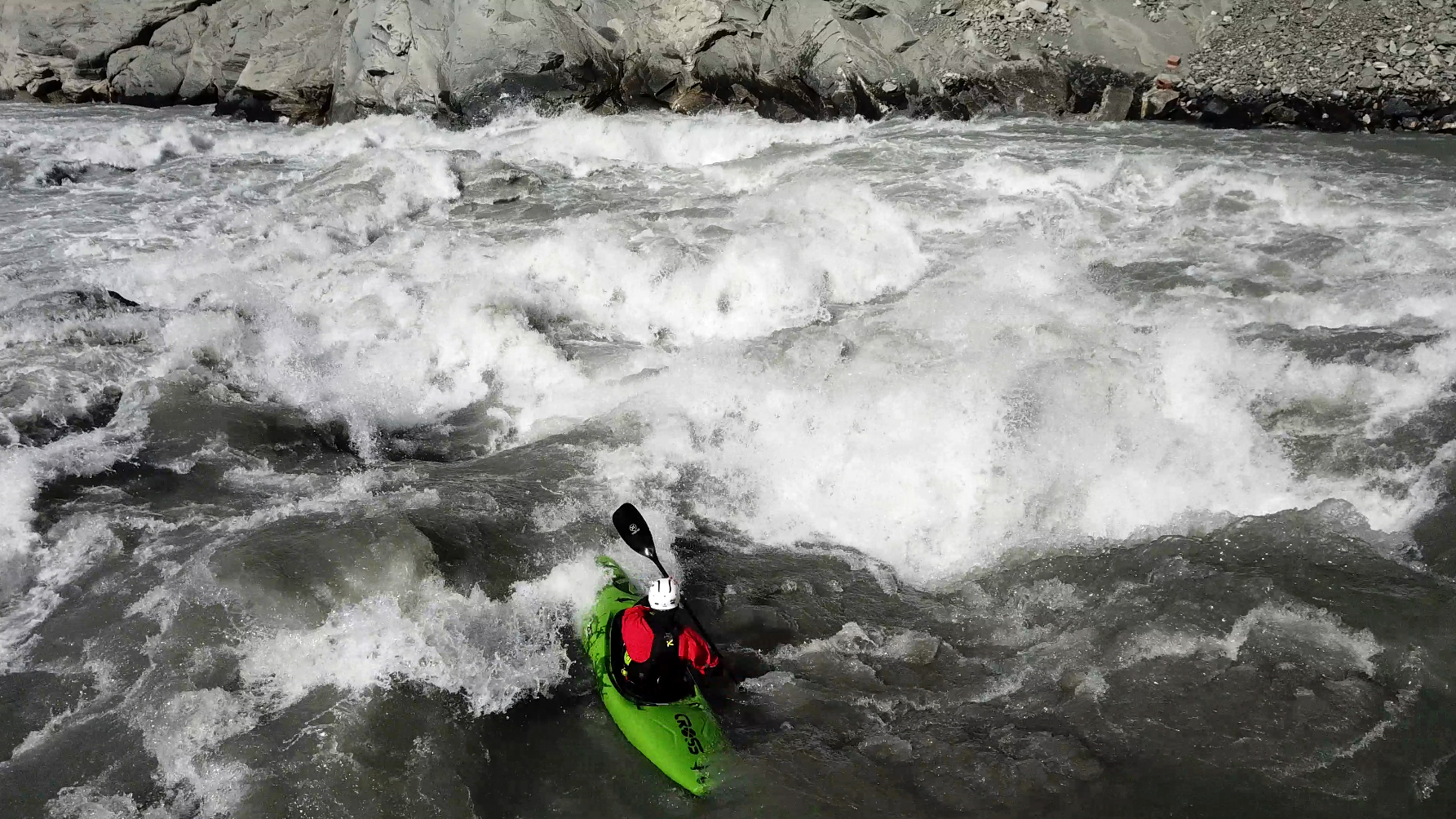 "Woop woop! Eddy on the left."

Sergey, the Russian. The guy who seem to always keep it together, shouts to me to get me to shore for the next big rapid. I get out of my boat and see a hole that might be the biggest I have seen. I might just exaggerate this a bit. Maybe. It’s hard to recall with any kind of precision, but hey, it is big. Really big. No shit.

"Ah, I don’t remember this. But don’t be such a pussy. I’m sure Sven ran this last year."

The hole is not a good place to end up, and some of the backwash flows straight into a siphon downstream. In other words, there is plenty of crap to focus on to drain any kind of motivation to run this white water, but there is three meters of green glassy water making a path past the hole on river left. I see it. I feel it. “So, fucking go for it”, is my thought.

And so it goes. I put on my spray deck in a tens motion, push my self into the eddy and float around doing some wannabe-yoga-calming breathing. I lift my paddle, David and Palo both raise their hands while their other hand tightly is gripping the most important piece of equipment for this trip, a camera, and I charge into the current. I put in one stroke, two strokes before a boil puts me two meters off line. I push back on line and surely as the sun will rise, another boil puts me back into the disaster zone. I push one last time, and end up shaving the side of the hole, pretending to myself and the others to handle this shit in full 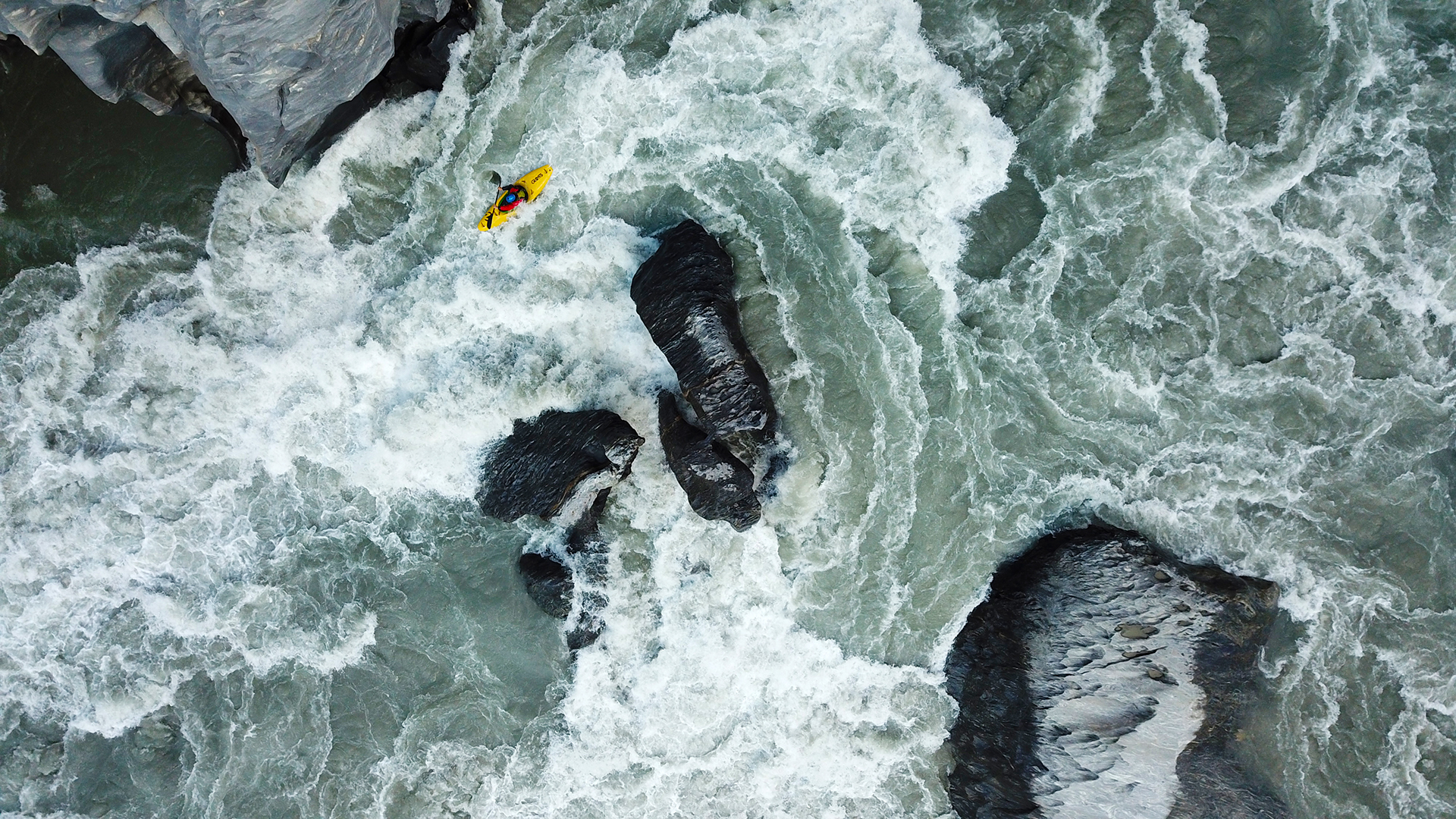 This is Indus, seen from a kayaker’s perspective. Boils and braking waves pushing you. Small and big holes always occurring out of nowhere, like the Spanish inquisition. Big and long rapids, but almost always a chance to scout and walk, and a strange feel of friendliness from the water. Maybe Bram, stuck like deep in a hole like a turkey on thanksgiving, would object to the word friendliness. No, the word friendly does not touch his wet lips, as he pulls his deck and gets ready to go deep. But most of the holes, I believe, will kick your ass and spit you out. And most importantly: if there is a lot of water, there is usually not that many rocks.

We have set up camp, and Salman have made us delicious chicken handi.

"Tell me, Salman, is there some nan?"

"Yes, David, I got some from a guy in the village."

"Salman! I fucking love you!"

"Ahaha! David…it is ok for two men to love each other, but you need to marry a woman."

And with these wise words uttered by Salman as the sun sets over a random 7000 meter peak above the Rondu canyon, I’ll let your dirty mind drift off to how the six other days on the Indus might have been with the fantastic Zet/Hiko crew.

Are you ready for this?